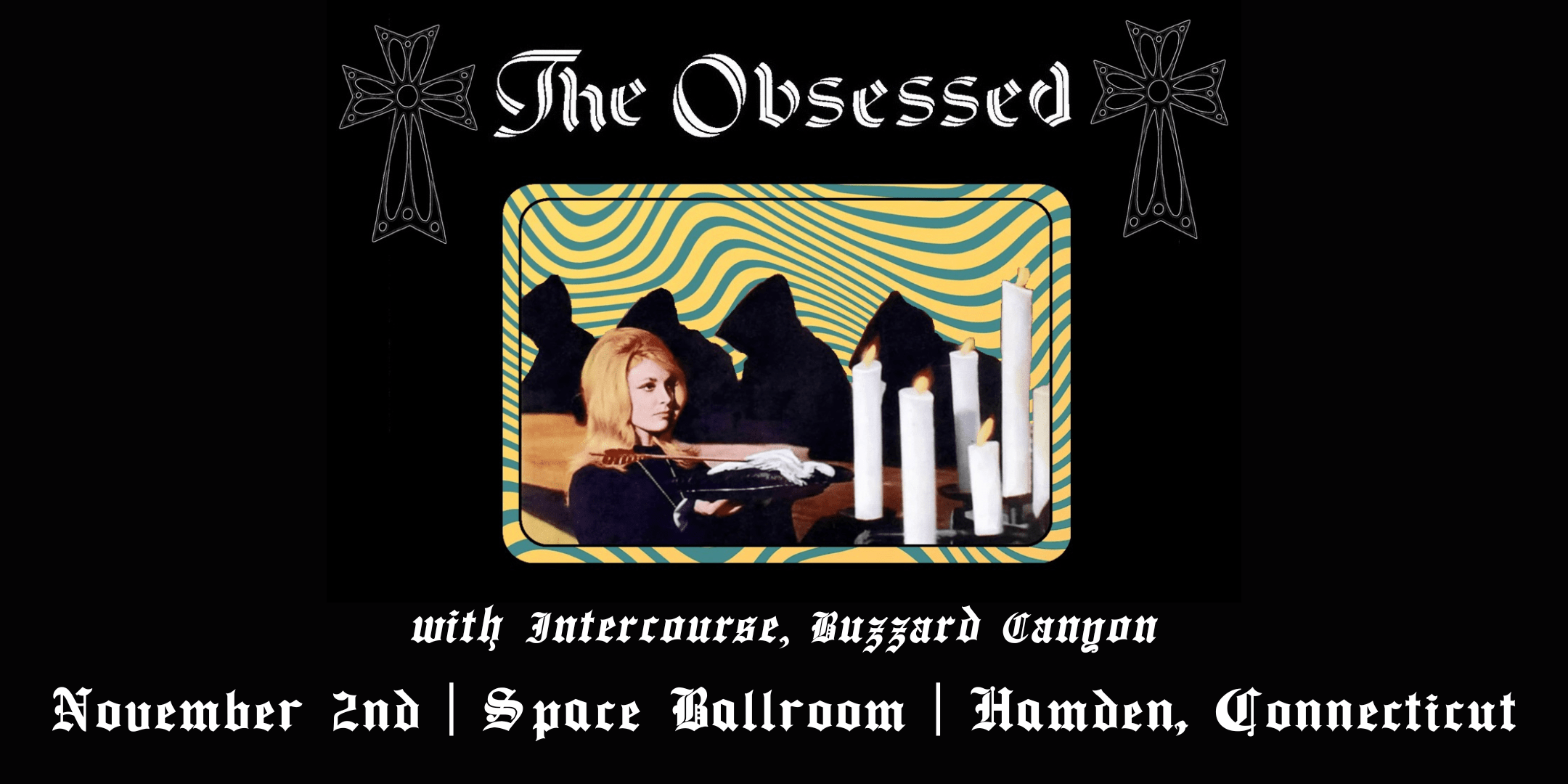 By purchasing tickets to this event, you agree to abide by the State of CT, City of Hamden, Artist, and Space Ballroom’s Health and Safety measures in effect at the time of the event. Check back for updates to your event on our website as guidelines and entry requirements are subject to change.

Upon leaving Saint Vitus — whose unabashed worship of Black Sabbath helped lay the groundwork for the sludge, stoner, and doom metal mini-movements of the ’90s — vocalist/guitarist Scott “Wino” Weinrich re-formed the Obsessed, a band he’d founded in Washington, D.C. in the early ’80s prior to joining Saint Vitus. Initially including a rhythm section of bassist Mark Laue and drummer Ed Gulli, the Obsessed had recorded a live EP back in 1984, but didn’t make their full-length debut until 1990’s The Obsessed, recorded for the small Hellhound label.

Personnel shifts ensued (Melvins drummer Dale Crover passed through the ranks at one time or another), and bassist Scott Reeder and drummer Greg Rogers joined for the 1991 follow-up, Lunar Womb. Reeder subsequently left the band to join Kyuss, and was replaced by Guy Pinhas, just as the Obsessed were landing a major-label deal with Columbia. Although many described it as the group’s most focused album, 1994’s The Church Within also proved to be their last. Following the breakup, Pinhas and Rogers formed Goatsnake, while Weinrich started up a new outfit first called Shine then quickly renamed Spirit Caravan. In 1999, Southern Lord issued a collection of outtakes and rarities titled Incarnate, and the following year repackaged The Obsessed together with the original lineup’s 1984 EP.

After pursuing a number of projects in the new millennium — including reuniting with Saint Vitus and appearing on Dave Grohl’s all-star metal project Probot — Scott “Wino” Weinrich announced in 2012 that he was reuniting the Church Within lineup of the Obsessed to play a handful of festival dates. In 2016, Weinrich declared he was re-forming the Obsessed as a going concern, although with a new lineup that featured Wino on vocals and guitar, Dave Sherman on bass, and Brian Costantino on drums. The new edition of the Obsessed signed a deal with independent metal label Relapse Records, and the label released Sacred — their first full-length studio effort in 23 years — in April 2017. Latter-day bassist Dave Sherman died on September 7, 2022 at the age of 55.

Renowned for incendiary live shows and ferocious stage presence, Intercourse carve a singular niche within New England’s outsider hardcore scene. Founded in 2014 by vocalist Tarek Ahmed, a self-titled EP soon followed, establishing a steady stream of releases punctuated by 2016’s Pissing into the Abyss EP and 2017’s split release with North Carolina’s The Asound. 2018’s debut lp Everything is Pornography When You’ve Got an Imagination and 2019’s Bum Wine 7” (both on Constant Disappointment Records) saw the band further expanding their reach by venturing out across New England and the Mid-Atlantic through to North Carolina, selling out multiple vinyl pressings in the process.

Though previously beset upon with fluctuating lineups (no doubt folding under the weight of the madness), Ahmed and longtime drummer Caleb Porter mined opportunity from within the inertia of 2020’s pandemic, concluding the year with both a decisive incarnation and sophomore record Rule 36. Engineered and produced at Dead Man’s Blade Studio with Ryan Pelegano (Posture and the Grizzly, Double Gainer) at the helm, the 9 tracks contained herein see Ahmed’s cynically unhinged vocals bolstered by guitarist Sean Prior’s unholy squall, Porter’s pummeling onslaught, and bassist Pete Stroczkowski’s molten sludge. The group blister through apocalyptic landscapes of fetishistic surgeons, reptilian onanists, and belligerent MAGA bros at the speed and heft of a bullet train collision, stopping only once the cacophonous feedback of closer ‘Pagliacci Was Ahead Of His Time’ sputters out from the weight of Ahmed’s screams of unfettered grief and self-destruction.

Poised for a return to the stage and an opportunity to once again unleash their particular brand of caterwaul unto live audiences everywhere, Intercourse offer up Rule 36 in the interim. The time until then will be no doubt spent doing what comes naturally to the band: preparing the next barrage of sonic assault.

A fuzz-tastic blend of doom, stoner and southern bluesy hard rock with female vocals! For fans of: Slo Burn, Foghat, The Atomic Bitchwax, Captain Beyond, Demon Lung and Witch Mountain.

Manage Cookie Consent
To provide the best experiences, we use technologies like cookies to store and/or access device information. Consenting to these technologies will allow us to process data such as browsing behavior or unique IDs on this site. Not consenting or withdrawing consent, may adversely affect certain features and functions.
Manage options Manage services Manage vendors Read more about these purposes
View preferences
{title} {title} {title}